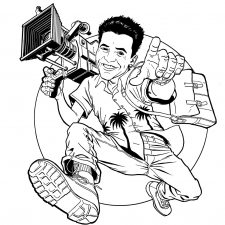 Allow me to introduce myself

I’m Alan Hereford, a cinematographer based in the San Francisco Bay Area.

Some highlights of my career include: Shooting the BTS for Matrix II & III, Camera Operator on Top Chef, Mythbusters and the Emmy and James Beard Award-winning Avec Eric.

I’m YOUR Director of Photography and Camera Operator for cooking shows, television programs and feature and corporate films because: